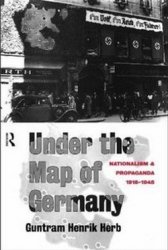 At the close of the First World War, propaganda mapping played a crucial role in the creation of a consensus about German national territory.
Under the Map of Germany provides a detailed and vivid analysis of the history and techniques of nationalist mapping in inter-war Germany. Using extensive archival documentation - including many previously undiscovered maps - the author charts the development of new concepts of national territory and the establishment of an effective propaganda mapping network. His research demonstrates that a consensus about the extent of the Greater German nation was not created by skillful Nazi propagandists, but by the collaborate efforts of respected scholars and nationalist activists during the Weimar Republic. Challenging the belief that national self-determination is a just cause, Under the Map of Germany reveals that national territories are not tangible entities that can be clearly delimited, but are artificial constructs open to a wide range of interpretations.