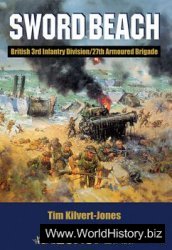 As the left most inland flank of the D-Day landings, Sword Beach was thought most likely to receive the first German counterattacks. The British troops selected for the assault had the tasks of securing the beach and advancing on the heavily defended medieval town of Caen. The troops also were determined to link up with British paratroopers and glider units who had landed the night before on special missions and were not equipped to withstand an armored counterattack alone. Backed up by an impressive array of modified armored vehicles, the veteran 3rd Division, spearheaded by No. 4 Army Command.