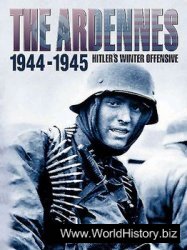 In December 1944, just as World War II appeared to be winding down, Hitler shocked the world with a powerful German counteroffensive that cracked the center of the American front. The attack came through the Ardennes, the hilly and forested area in eastern Belgium and Luxembourg that the Allies had considered a “quiet” sector. Instead, for the second time in the war, the Germans used it as a stealthy avenue of approach for their panzers. Much of U.S. First Army was overrun, and thousands of prisoners were taken as the Germans forged a 50-mile “bulge” into the Allied front. But in one small town, Bastogne, American paratroopers, together with remnants of tank units, offered dogged resistance. Meanwhile the rest of Eisenhower’s “broad front” strategy came to a halt as Patton, from the south, and Hodges, from the north, converged on the enemy incursion. Yet it would take an epic, six-week-long winter battle, the bloodiest in the history of the U.S. Army, before the Germans were finally pushed back.