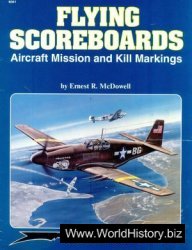 Squadron/Signal Publications 6061: Flying Scoreboards: Aircraft Mission and Kill Markings - Aircraft Specials series
Author: Ernest R. McDowell
Squadron/Signal Publications
ISBN: 0897473051
1993
Pages: 66
Format: PDF
Size: 28.53МБ
Language: English
...At some point back in the prehistoric period a man must have decided to boast of his prowess as a hunter or warrior by selecting some tangible method to publicly show how skillful or fierce he proclaimed himself to be. What form this took will never be known but it could have been the tooth of a saber-toothed tiger, the skin of some animal or perhaps the head of an enemy of his tribe.
History does recount the use of scalps, shrunken heads and other such items for this purpose. As man became more civilized he had to forsake such grisly means and rather than display the remains of his victory, he decided to use personal ornamentation. Fierce head dress and masks, warpaint, tattoos and other similar items served to show others" how great a warrior he was.
As warfare advanced the need for larger groups to be recognized as either friend or foe brought about the development of uniforms and in time these became very colorful and distinctive. Mention the Bengal Lancers, the U.S. 7th Cavalry, the Black Watch, Cossacks, Coldstream Guards. U.S. Marine Corps, French Foreign Legion, or the Green Berets and a picture of a man in a particular uniform quickly comes to mind and conveys the idea that he was part of an elite organization with a sense of pride and a strong esprit de corps.
It was this type of background and the need for recognition that was responsible for the use of victory and mission markings on aircraft that began during the First World War and have been carried forward to this day.