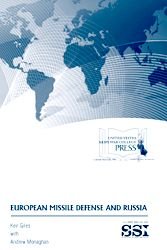 This monograph examines the history of missile defense and the current dialog
from a Russian perspective, in order to explain the root causes of Russian alarm.
Specific recommendations for managing the Russia relationship in the context
of missile defence are given.
Important conclusions are also drawn for the purpose of managing the dialog
over missile defense plans not only with Russia as an opponent,
but also with European NATO allies as partners and hosts.

The latter are especially significant in the light of these partners' heightened
hard security concerns following Russian annexation of Crimea
and continuing hostile moves against Ukraine.
This analysis was completed before the start of Russia's annexation of Crimea in March 2014,
but already warned of the prospect of direct military action by Russia in Europe
in order to protect Moscow's self-perceived interests.