Yorkshire Sieges of the Civil Wars 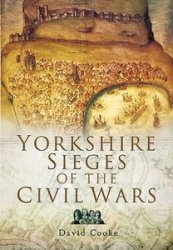 Author: David Cooke
Yorkshire Sieges of the Civil Wars
Pen & Sword Military
2011
ISBN: 1844159175
Format: EPUB
Size: 18,6 МБ
Language: English
Pages: 192
Throughout recorded history Yorkshire has been a setting for warfare of all kinds - marches, skirmishes and raids, pitched battles and sieges. And it is the sieges of the Civil War period - which often receive less attention than other forms of combat - that are the focus of David Cooke's new history.
Hull, York, Pontefract, Knaresborough, Sandal, Scarborough, Helmsley, Bolton, Skipton - all witnessed notable sieges during the bloody uncertain years of the Civil Wars. His vivid reconstructions allow the reader to visit the castles and towns where sieges took place and stand on the ground where blood was spilt for the cause - for king or Parliament. Using contemporary accounts and a wealth of maps and illustrations, his book allows the reader to follow the course of each siege and sets each operation in the context of the Civil Wars in the North.