The Penguin History of the Second World War, 3rd Edition 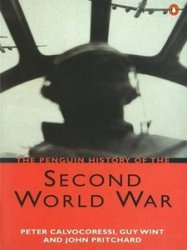 Author: Peter Calvocoressi, Guy Wint, John Pritchard
The Penguin History of the Second World War, 3rd Edition
Penguin Books
ISBN: 0140285024
1999
Format: EPUB
Size: 55,0 МБ
Language: English
Pages: 1344
First published in 1972 under the title TOTAL WAR, THE PENGUIN HISTORY OF THE SECOND WORLD WAR was designed by its authors to show a rising generation why the Second World War happened and how it was conducted. In this bold feat of compression they give as much stress and space to political, social and moral forces (not to mention intelligence and other activities 'behind the line'.) as to the ensuing clashes of arms. This acclaimed analysis of the causes and courses of the Second World War has stood the tests of time and criticism.