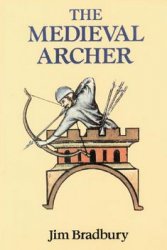 It is a delight to read a book which recognises the importance of warfare in medieval times...also...discusses the changing role of the archer in medieval society. SIR STEVEN RUNCIMANThis book traces the history of the archer in the medieval period, from the Norman Conquest to the Wars of the Roses. From a close study of early evidence, Mr Bradbury shows that the archer's role before the time of Edward I was an important but rarely documented one, and that his new prominence in the fourteenth century was the result of changes in development of military tactics rather than the introduction of the famous `longbow'. A second thread of the book examines the archer's role in society, with particular reference to that most famous of all archers, Robin Hood. The final chapters look at the archer in the early fifteenth century and then chronicle the rise of the handgun as the major infantry weapon at the bow's expense. JIM BRADBURY writes and lectures on battles and warfare in England and France in the middle ages.