U-Boat Warfare: The Evolution of the Wolf Pack 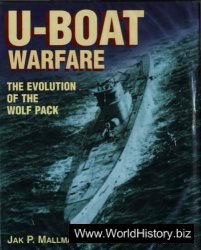 During the course of World War II, German U-boats threatened Britain's very survival. Noted U-boat historian Jak Mallman-Showell takes a fresh look at the strategy employed by both sides as Germany and Great Britain engaged in a fateful game of measure and countermeasure to gain control of the Atlantic supply lines. Drawing upon original records from the U-boat headquarters, the Royal Navy, and British special intelligence, the author explores how and why U-boat attacks were planned, describes U-boat organization, and tells what actually happened on the high seas. Supplemented by 150 photographs, many published here for the first time, this new study should be required reading for all those interested in the development of strategy and tactics during one of the most critical campaigns of World War II.