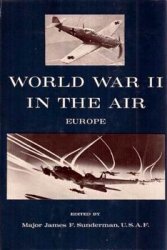 While older, this are fine vignettes of European combat. From the Blitzkrieg, through Battle of Britain, to the counterattack over the occupied countries, digressing to North Africa, then the Strategic Air Offensive, D-Day, and those final-hour 'miracle weapons'- this moves rapidly. Some sections will be written by familiar names: Johnny Johnson (RAF), Ernest K. Gann or Robert S. Johnson (USAAF). Others are from unknowns like Maj. Richard Thruelsen and Lt. Elliott Arnold. Units from different Allied air forces were tightening a noose around Rommel's army in Africa after the second battle of el Alamein.