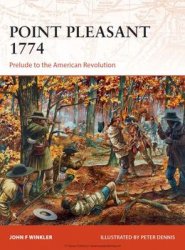 The only major conflict of Lord Dunmore’s War, the battle of Point Pleasant was fought between Virginian militia and American Indians from the Shawnee and Mingo tribes. Following increased tensions and a series of incidents between the American settlers and the natives, Dunmore, the last colonial governor of Virginia, and Colonel Andrew Lewis led two armies against the tribes. On October 10, 1774 Lewis and his men resisted a fierce attack, led by Shawnee chief Keigh-tugh-qua, or Cornstalk, at Point Pleasant, near the mouth of the Kanawha river. Despite significant losses on both sides, Lewis succeeded in forcing the Shawnee to retreat back to their settlements in the Scioto Valley.