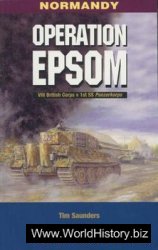 Operation EPSOM was General Montgomery's third attempt to take the City of Caen, which had been a key British D-Day objective. Delayed by a storm, the attack, designed to envelop Caen from the west, eventually began at the end of June 1944. The Territorial Army battalions of 15th Scottish Division spearheaded the attacks through the well developed positions of 12th Hitlerjugend SS Panzer Division. It was slow going and when tanks of the 11th Armoured Division dashed to the Odon Bridges they ran into the concentrated fire of dug-in panzers.