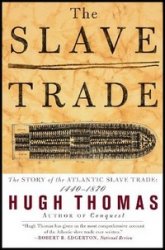 Author: Hugh Thomas
The Slave Trade: The Story of the Atlantic Slave Trade: 1440-1870
Simon & Schuster
ISBN: 0684835657
1997
Format: EPUB
Size: 40,8 МБ
Language: English
Pages: 912
After many years of research, award-winning historian Hugh Thomas portrays, in a balanced account, the complete history of the slave trade. Beginning with the first Portuguese slaving expeditions, he describes and analyzes the rise of one of the largest and most elaborate maritime and commercial ventures in all of history. Between 1492 and 1870, approximately eleven million black slaves were carried from Africa to the Americas to work on plantations, in mines, or as servants in houses.
The Slave Trade is alive with villains and heroes and illuminated by eyewitness accounts. Hugh Thomas's achievement is not only to present a compelling history of the time but to answer as well such controversial questions as who the traders were, the extent of the profits, and why so many African rulers and peoples willingly collaborated. Thomas also movingly describes such accounts as are available from the slaves themselves.