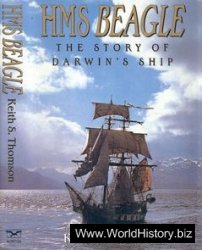 "After having twice been driven back by heavy south-west gales, His Majesty's Ship Beagle, a ten-gun brig, under the command of Captain Fitzroy, sailed from Devonport on the 27th of December, 1813". These words open Darwin's story of his historical voyage in the "Beagle". Darwin's views and his books are well known but very little is known of the ship that circumnavigated the world. The "Beagle" was not a dashing frigate of the time but was known in its day as a "coffin brig", more likely to founder than to sail twice round the world. While the "Darwin voyage" has been celebrated in the history of exploration, her other two voyages - a prior survey of South America, including Tierra del Fuego and Cape Horn, and the first complete exploration of the coasts of Australia - are less well known.