Assembly Ships of the Mighty Eighth 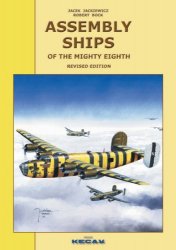 The first air combat of WWII between RAF bombers and Luftwaffe fighters took place on the 18th December 1939. when twenty-four Wellingtons of Nos.9, 37, and 149 Squadrons took off on an armed reconnaissance sortie over the Helgoland Bay (two of them returned early due to technical problems). It was a bright, sunny day, and the sky was clear of clouds, but no targets were visible so the Wellingtons headed for home with their bombload still on board. However the formation was spotted by the German radar system and sixteen Bf 110s and thirty-four Bf 109s were sent to intercept. The fighters used whatever tactics they wanted towards the slow bombers, attacking them from every direction, so they could choose the best range at which to open fire. The combat resulted in twelve bombers being shot down plus three badly damaged Wellingtons that eventually got back to base.