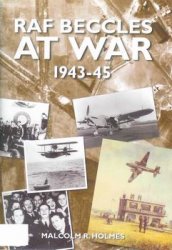 Originally intended for use as a heavy bomber base for the 8th United States Army Air Force, the airfield at Beccles became a victim of the changing operational pattern of the War and was instead assigned to the RAF. From August 1944 it was used by Coastal Command largely as a base for Air Sea Rescue and as an emergency landing field for aircraft returning from Europe as it was the most easterly base in Britain. This is the story of the dramatic rescues, forced landings and secret testing that went on at RAF Beccles during its two tumultuous years of wartime service.