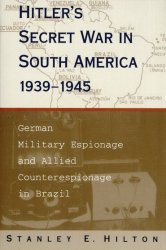 “Published first in Brazil as Su?stica sobre o Brasil, this examination of the rise and fall of German espionage in that country spent months on the best-seller list there and generated a national furor as former spies and collaborationists denounced it as a CIA ploy. Here, for the first time, are the colorful stories of such German agents as "Alfredo," probably the most important enemy operative in the Americas; "King," who was decorated for his daring exploits but who carelessly mentioned the real names of his collaborators in secret radio messages; the bumbling Janos Salamon; and the debonair Hans Christian von Kotze, who ultimately betrayed the Abwehr (German Military Intelligence).”