The Politically Incorrect Guide to Islam 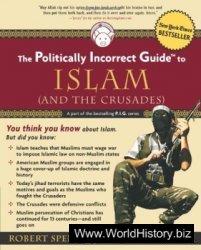 Everything (well, almost everything) you know about Islam and the Crusades is wrong because most textbooks and popular history books are written by left-wing academics and Islamic apologists who justify their contemporary political agendas with contrived historical "facts."
But fear not: Robert Spencer refutes popular myths and reveals facts that you won't be taught in school and will never hear on the evening news. He supplies a revealing list of "Books You Must Not Read" (as far as the PC left is concerned), and takes you on a fast-paced politically incorrect tour of Islamic teaching and Crusades history that will give you all the information you need to understand the true nature of the global conflict America faces today.
Bet your teacher never told you:
- Muhammad did not teach "peace and tolerance"-he led armies and ordered the assassination of his enemies
- The Qur'an commands Muslims to make war on Jews and Christians
- The much-ballyhooed "Golden Age" of Islamic culture was largely inspired by non-Muslims
- What is known today as the "Islamic world" was created by a series of brutal conquests of non-Muslim lands
- The Crusades were not acts of unprovoked aggression by Europe against the - Islamic world, but a delayed response to centuries of Muslim aggression
- The jihad continues today: Europe could be Islamic by the end of the twenty-first century
- Ex-Muslims must live in fear even in the United States