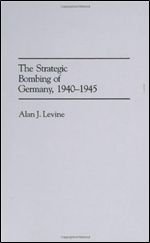 his book is the only full-scale account of the strategic air offensive against Germany published in the last twenty years, and is the only one that treats the British and the Americans with parity. Much of what Levine writes about British operations will be unfamiliar to American readers. He has stressed the importance of winning air superiority and the role of escort fighters in strategic bombing, and has given more attention to the German side than most writers on air warfare have. Levine gets past a simple account of "what we did to them" and describes the target systems and German countermeasures in detail, providing exact yet dramatic accounts of the great bomber operations the Ruhr dams, Ploesti, and Regensburg and Schweinfurt.