The Battle of Neuve Chapelle 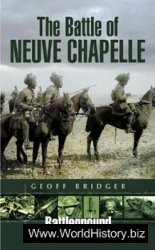 Neuve Chapelle a lost battlefield is now opened up for the explorer to learn more about the actions that took place there. In Early 1915, the British decided to take the offensive for the first time in the war against German positions in Northern France. The initial objective was a bulge, about one mile across, in their lines at Neuve. Events which took place here early in 1915 are described in detail and show why this almost forgotten battle set the course of the war.