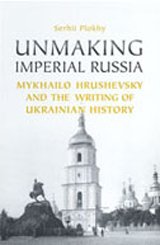 From the eighteenth century until its collapse in 1917, Imperial Russia – as distinct from Muscovite Russia before it and Soviet Russia after it – officially held that the Russian nation consisted of three branches: Great Russian, Little Russian (Ukrainian), and White Russian (Belarusian). After the 1917 revolution, this view was discredited by many leading scholars, politicians, and cultural figures, but none were more intimately involved in the dismantling of the old imperial identity and its historical narrative than the eminent Ukrainian historian Mykhailo Hrushevsky (1866–1934).