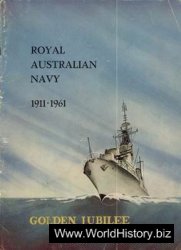 The Royal Australian Navy (RAN) is the naval branch of the Australian Defence Force (ADF). Following the Federation of Australia in 1901, the ships and resources of the separate colonial navies were integrated into a national force: the Commonwealth Naval Forces. Originally intended for local defence, the navy was granted the title of 'Royal Australian Navy' in 1911, and became increasingly responsible for defence of the region.
This book follows it on their 50-th jubilee.