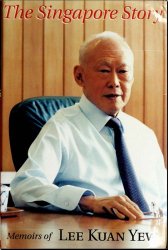 Visionary? Authoritarian? Model for the West? Lee Kuan Yew, the long-time leader of Singapore, has been called all these things, and more. In these vivid memoirs, Lee takes a profoundly personal look back at the events that led to Singapore's independence and shaped its struggle for success. And, as always, he lets the chips fall where they may.In intimate detail, Lee recounts Singapore's unforgettable history. You'll be with Lee as he leads striking unionists against the colonial government; shares tea and rounds of golf with key players in Britain and Malaya; and drinks warm Anchor beer with leaders of the communist underground at secret midnight meetings. From British colonial rule through Japanese occupation in World War II, Communist insurrection, riots, independence -- and the struggles that followed -- few political memoirs anywhere have been this blunt, or this fascinating.Anyone interested in the political history of Singapore, Asia, and the modern world.