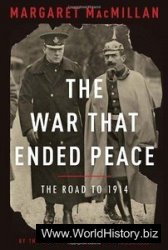 Author: Margaret MacMillan
The War That Ended Peace: The Road to 1914
Profile Books
2013
ISBN: 140006855X
Format: EPUB
Size: 10,4 МБ
Language: English
Pages: 739
From the bestselling and award-winning author of Paris 1919 comes a masterpiece of narrative nonfiction, a fascinating portrait of Europe from 1900 up to the outbreak of World War I.
The century since the end of the Napoleonic wars had been the most peaceful era Europe had known since the fall of the Roman Empire. In the first years of the twentieth century, Europe believed it was marching to a golden, happy, and prosperous future. But instead, complex personalities and rivalries, colonialism and ethnic nationalisms, and shifting alliances helped to bring about the failure of the long peace and the outbreak of a war that transformed Europe and the world.