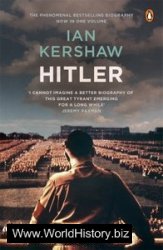 Ian Kershaw is the premier historian on Hitler and Nazi Germany and this book from the Profiles in Power series is an excellent study on the roots, success, and ultimate destruction of the "Fuehrercult." Two schools of thought are used by historians to understand the power of Nazism. "Intentionalists" see the Nazi regime as the embodiment of Hitler as the totalitarian leader. "Structuralists," however, believe the policies and, ultimately, the crimes of Nazi Germany were stumbled upon by underlings working under a loose framework rather than a deliberate program. As one would expect, Kershaw takes from both these theories to develop his comprehensive profile.

Kershaw examines Hitler's worldview of racial struggle, anti-Semitism, and living space for the German empire--how these ideas developed (Hitler's background) and how Hitler used them to create his leadership image. This Fuehrercult unified a fractional party, helped repress opposition, and created a mass following. Through Hitler's charismatic leadership the German people would be prepared to fight the Nazi fight (inevitably WWII). Kershaw also looks at the feudal-like power relations inside the Third Reich; a regime of open-ended decrees that left no "smoking gun" pointing at Hitler for the Final Solution. Finally, Kershaw examines the destruction of Hitler's power during which the irrational optimism that "Providence" (i.e. Hitler's will) would prevail was still believed by many (particularly the 'court' of Hitler's bunker).