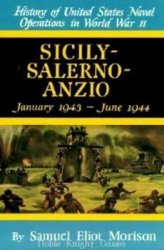 
This volume in Admiral Morison's history takes up the story of American naval activities in the Mediterranean, and covers three major amphibious operations — the invasion of Sicily, the capture of the Salerno beachhead, and the long Anzio beachhead struggle. In all three the United States Navy distinguished itself, both for impeccable performance in landing the Army where it wanted to go, and in supporting with naval gunfire the troops fighting ashore.