Hitler's Undercover War: The Nazi Espionage Invasion of the U.S.A. 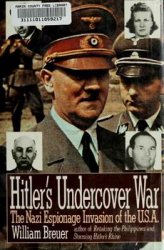 Soon after Hitler came to power in 1933, his secret service chief, Wilhelm Canaris, launched a large number of undercover agents across the Atlantic. As the author points out, the U.S. in the 1930s was a spy's paradise, a booming industrial giant with hardly any security safeguards in place. Breuer ( Retaking the Philippines ) traces the most effective Nazi agents and the FBI's slow awakening to their threat. The reader is plunged into a world of microdots, invisible ink, incendiary pencils, coded signals to offshore U-boats, bull-necked Nazi supporters, curvaceous blondes, sinister figures with hatbrims pulled low over their eyes, and agents who sing like canaries after they're nabbed. The dreaded nemesis of all these bad guys (and gals), FBI director J. Edgar Hoover, is described as an iron-jawed super-sleuth. Written in an appropriate dated style, this well-researched account of Nazi agents' penetration of military installations, defense plants and high-level government agencies in Washington, and the FBI's delivery of what Breuer calls the knockout blow, is great fun.