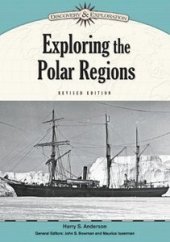 Author: Harry S. Anderson, John S. Bowman, Maurice Isserman
Exploring the Polar Regions (Discovery & Exploration)
Chelsea House Publications
2009
Format: PDF (rar+3%)
Size: 9,66 mb
Language: English
Pages: 240
Starting with the final expedition of John Franklin, 19th-century England's most honored and respected Arctic explorer, the opening of the polar regions resulted in the establishment of the multitudes of research stations that produce observations, measurements, and data crucial to all areas of scientific inquiry. The first mariners to venture south signed on for voyages that lasted for years with no guarantee they would return. If they did come back from the frigid zones, it was with their health permanently damaged by bouts of scurvy and months of inadequate diet. Yet, there was never a shortage of eager, courageous men willing to replace the unfit.