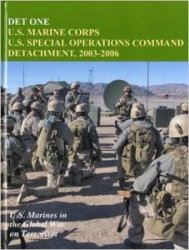 Author: John P. Piedmont, Charles P. Neimeyer
DET One: U.S. Marine Corps, U.S. Special Operations Command Detachment, 2003-2006
Military Bookshop
ISBN: 1780397321
2010
Format: PDF
Size: 6,3 МБ
Language: English
Pages: 140
The story of the Marine Corps U.S. Special Operations Command Detachment, which became known as Det One, is an extraordinary tale. On its face, the story would not rate a minute’s glance. One small group of Marines, about a hundred in number, formed, trained, and went to war. This all happened as the nation was 18 months into the Global War on Terrorism and as the Marine Corps was deploying I Marine Expeditionary Force in Operation Iraqi Freedom. Yet the story behind the basic facts is not only far more intricate and fascinating, with dramatic episodes and intrepid characters from the Pentagon to Camp Pendleton, it portended great significance for the Marine Corps. What makes the Det One story extraordinary is the shift in Marine Corps policy that brought it about, the maturation of the special operations capabilities of forward-deployed Marine expeditionary units that made it possible, and the patriotism, valor, fidelity, and abilities of the Marines and Navy Corpsmen who manned it. Although Det One has passed now into the history books, its legacy survives in the formation of Marine Corps Special Operations Command and in the lessons learned and experiences of its members, who now continue to serve in dozens of units. Lieutenant Colonel John P. Piedmont Marine Field Historian in Iraq in April 2004, saw the historical significance of Det One and decided to pursue its history as a project. Under the director of the History and Museums Division at the time, Colonel John W. Ripley, he was given permission to proceed with his collections with a view toward turning them into a monograph. What follows here is the culmination of his efforts, the product of two years’ work, more than 60 interviews done in Iraq, Washington, D.C., Virginia, and California, and the collection of hundreds of documents.