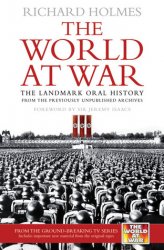 Author: Richard Holmes
The World at War The Landmark Oral History from the Previously Unpublished Archives
Ebury Press
ISBN: 0091917530
2011
Format: EPUB
Size: 6,0 МБ
Language: English
Pages: 672
The World at War is the definitive television work on the Second World War. It set out to tell the story of the war through the testimony of key participants - from civilians to ordinary soldiers, from statesmen to generals. First broadcast in 1973, the result was a unique and irreplaceable record since many of the eyewitnesses captured on film did not have long to live.
The programme's producers committed hundreds of interview-hours to tape in its creation, but only a fraction of that recorded material made it to the final cut. For more than 30 years the interviews have never been allowed to be published - until now.