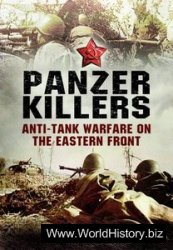 Author: Artem Drabkin
Panzer killers: Anti-tank Warfare on the Eastern Front
Pen and Sword;
ISBN: 1781590508
2013
Format: EPUB
Size: 2,1 МБ
Language: English
Pages: 224
What was it like to confront the German panzer armies as an anti-tank gunner on the Eastern Front during the Second World War? How could you hope overcome of one of the best-equipped, well-trained and tenacious armored forces of the time? And how did the Red Army's tactics and skills develop over the course of the war in order to counter the threat posed by the elite troops of the Wehrmacht? The vivid personal narratives of Red Army anti-tank men selected for this book give a fascinating insight into these questions - and into the first-hand experience of anti-tank warfare seventy years ago. Their testimony reveals how lethal, rapid, small-scale actions - gun against tank - were fought, and it shows how such isolated actions determined the outcome of the massive offensives and counter-offensives that characterized the struggle on the Eastern Front. Panzer Killers is a valuable addition to the series of graphic eyewitness accounts of every aspect of the Red Army's war on the Eastern Front published by Pen & Sword.