The New Knighthood: A History of the Order of the Temple 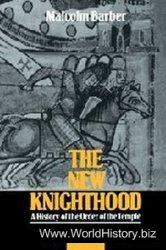 The New Knighthood: A History of the Order of the Temple
Author: Malcolm Barber
Cambridge University Press
ISBN: 0521420415, 0521558727
2000
Pages: 457
Format: DjVu
Size: 10.08МБ
Language: English
The Order of the Temple, founded in 1119 to protect pilgrims around Jerusalem, developed into one of the most influential corporations in the medieval world. It has retained its hold on the modern imagination thanks to the dramatic events of the Templars' trial and abolition two hundred years later, and has been involved in historical mysteries from masonic conspiracy to the survival of the Turin shroud. Malcolm Barber's lucid narrative separates myth from history in this full and detailed account of the Order, from its origins, flourishing and suppression to the Templars' historical afterlife.