The Defence of the Dardanelles - From Bombards to Battleships 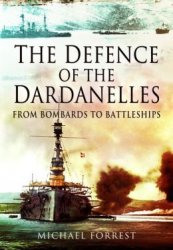 The Straits of Dardanelles that separates Europe and Asia Anatolia, were fortified in the 15th century with massive bronze bombards and history has proved that unwelcome ships have to run a formidable gauntlet. On 18 March 1915, a powerful fleet of British and French warships attempted to overwhelm the shore defenses of the Dardanelles to allow minesweepers to clear the Straits. The attack failed at huge cost; three ships sunk and three more seriously damaged.