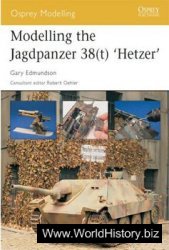 In the second half of World War II the German Army faced numerically superior armoured forces on the Eastern and Western Fronts. In order to counter this threat, tank destroyer production was increased. One of these tank destroyers was the Jagdpanzer 38 (t), or 'Hetzer', which proved to be a successful design with over 2,500 being produced in the 14 months before the end of the war. This title provides all the information that AFV modellers will need to build variants of the Jagdpanzer 38 (t) 'Hetzer', including the Bergepanzer 38 (t) recovery vehicle. It also includes camouflage, paint schemes and markings.