The Ghost of the Executed Engineer: Technology and the Fall of the Soviet Union (Russian Research Center Studies) 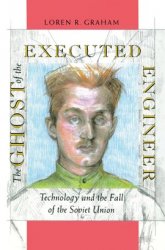 Stalin ordered his execution, but here Peter Palchinsky has the last word. Palchinsky tells of Soviet technology and industry, the mistakes he condemned in his lifetime, the corruption and collapse he predicted, the ultimate price paid for silencing those who were not afraid to speak out. The story of this visionary engineer's life and work, as Graham tells it, is also the story of the Soviet Union's industrial promise and failure.