Nestor Makhno - Anarchy's Cossack: The Struggle for Free Soviets in the Ukraine 1917-1921 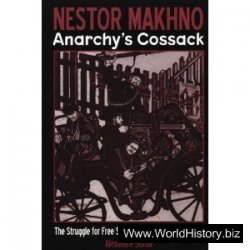 The phenomenal life of Ukrainian peasant Nestor Makhno (1888–1934) provides the framework for this breakneck account of the downfall of the tsarist empire and the civil war that convulsed and bloodied Russia between 1917 and 1921. As in many of history's chivalric tales, clashes were fought through lightning cavalry charges and bitter hand-to-hand, saber-wielding combat. The combatants were drawn from several camps: Budyenny's Red cavalry, the Don Cossacks and Kuban Cossacks (allied with the Whites), Ukrainian nationalists, and Makhnovist partisans. Makhno, a formidable and daring strategist, headed an army of anarchist insurgents—a popular peasant movement which bore his name.