From Imperial Splendour to Internment: The German Navy in the First World War 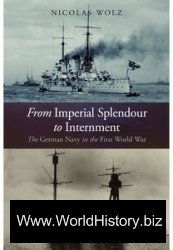 Author: Nicolas Wolz
From Imperial Splendour to Internment: The German Navy in the First World War
Seaforth Publishing
ISBN: 1848322283
2015
Format: EPUB + PDF (conv)
Size: 4,8 МБ + 11,0 МБ
Language: English
Pages: 320
This important new work describes how the Imperial German Navy, which had expanded to become one of the great maritime forces in the world, second only to the Royal Navy, proved, with the exception of its submarines, to be largely ineffective throughout the years of conflict. The impact of this impotence had a far-reaching effect upon the service. Germany, indeed most of Europe, was in the grips of a spirit of militant nationalistic fervour, and the inactivity of the great Imperial Navy caused deep frustration, particularly among the naval officers. Not only were they unable to see themselves as heroes, they were also ridiculed on the home front and felt profoundly humiliated. With the exception of the one major battle at Jutland, their ships saw little or no action at sea and morale slowly collapsed to a point where, at the end of the war, the crews were in a state of mutiny. The seemingly suicidal order that forced the fleet to go to sea against the British in 1918 was driven by a sense of humiliation, but coming at the war's end it triggered a revolution because the German sailors wanted no part in such madness. The internment at Scapa Flow was the ultimate shaming. This is a fascinating and perceptive analysis of a whole era, and it contributes substantially to our understanding of the war and its consequences - consequences, sadly, that helped pave the way for the Third Reich.