The Oxford Handbook of Byzantine Studies 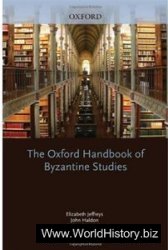 The Oxford Handbook of Byzantine Studies presents discussions by leading experts on all significant aspects of this diverse and fast-growing field. The Oxford Handbook of Byzantine Studies deals with the history and culture of the Byzantine Empire, the eastern half of the Late Roman Empire, from the fourth to the fourteenth century. Its centre was the city formerly known as Byzantium, refounded as Constantinople in 324 CE, the present-day Istanbul. Under its emperors, patriarchs, and all-pervasive bureaucracy Byzantium developed a distinctive society: Greek in language, Roman in legal system, and Christian in religion. Byzantium's impact in the European Middle Ages is hard to over-estimate, as a bulwark against invaders, as a meeting-point for trade from Asia and the Mediterranean, as a guardian of the classical literary and artistic heritage, and as a creator of its own magnificent artistic style.