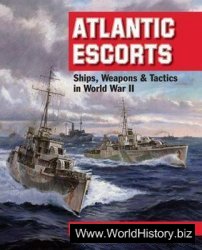 A warship designer and well-known author of a quartet of books on British warships, David K. Brown takes a detailed look at the Allied ships, weapons, and tactics that won the submarine war in the Atlantic in this handsomely illustrated book. Beginning with the lessons learned from World War I, the author outlines inter-war developments in technology and training and describes preparations for World War II. He then examines the balance of advantage as it see-sawed between U-boats and escorts when new weapons and sensors were introduced at a rapid rate.