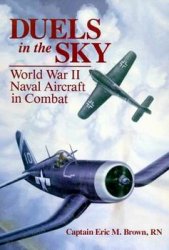 Eric Brown was the top test pilot for the Navy and has flown many of the planes in this book, some of them in anger. In this book the author runs chronologically through the war moving between the various naval theatres. He describes the nature of the warfare and follows the various battles giving a clear commentary of what happened. He introduces each new aircraft (including new marks) as they appear in the story. He then describes the specifications from a pilot's view before giving it a final verdict, describing its good and bad points. He does this for both Axis and Allied aircraft and then goes on to compare each allied aircraft against each axis aircraft before providing a verdict on how they would fare if they met. Not only is this a brilliantly informative book, it's a very easy read. It even gives you theoretical combat comparisons, such as Mustang IV versus Spitfire XIV. Find out how the Corsair II would fare against the FW190A-4.