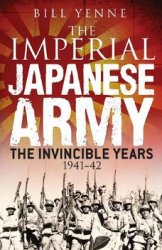 The German offensives which crushed Poland in 1939 and swallowed most of Western Europe in less than two months in 1940 have been well documented and heavily studied, however, the overall picture of the remarkable Japanese offensive land campaign in 1941–42 has received less attention. In this fascinating new book, Bill Yenne documents the years when the Imperial Japanese Army (IJA) was conducting its equally unstoppable ground campaign in the Far East, and unlike other books on this subject, he studies the campaign from the Japanese point of view. He reveals how the IJA were able to conquer huge swathes of Southeast Asia in a little over eight weeks after the attack on Pearl Harbor. Using first-hand accounts from Japanese sources, Yenne reveals the tactics and mindset of the IJA during their offensive, detailing the capturing of Manila, the Philippines, Hong Kong, Singapore, Burma, and the Dutch East Indies.