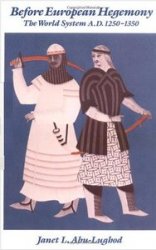 Before European Hegemony: The World System A.D. 1250-1350
Author: Janet L. Abu-Lughod
Oxford University Press
1991
ISBN: 0195067746
Pages: 464
Format: PDF
Size: 26 mb
Language: English
In this important study, Abu-Lughod presents a groundbreaking reinterpretation of global economic evolution, arguing that the modern world economy had its roots not in the sixteenth century, as is widely supposed, but in the thirteenth century economy--a system far different from the European world system which emerged from it. Using the city as the working unit of analysis, Before European Hegemony provides a new paradigm for understanding the evolution of world systems by tracing the rise of a system that, at its peak in the opening decades of the 14th century, involved a vast region stretching between northwest Europe and China. Writing in a clear and lively style, Abu-Lughod explores the reasons for the eventual decay of this system and the rise of European hegemony.