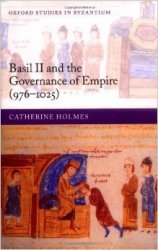 Author: Catherine Holmes
Basil II and the Governance of Empire (976-1025)
Oxford University Press
ISBN: 0199279683
2006
Format: PDF
Size: 14,5 МБ
Language: English
This is the first book-length study in English of the Byzantine emperor Basil II, the "Bulgar-slayer." Basil presided over a Byzantium which was the superpower of the eastern Mediterranean and the Middle East in the century before the Crusades. Catherine Holmes peels away the layers of later interpretations to reveal an empire that was governed by a potent mixture of subtle persuasion and brute force.