The Synchronisation of Civilisations in the Eastern Mediterranean in the Second Millennium B.C. III 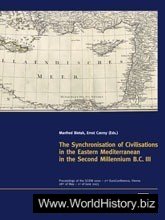 This substantial volume publishes the proceedings of the second general conference of the SCIEM 2000 Special Research Programme, held in 2003 at the Austrian Academy of Sciences. M. Wiener's key-lecture entitled Times change: The current state of the Debate in Old World Chronology" provides the volume’s introduction, followed by the section "Science and Chronology", which includes, among others, several controversial studies on the results of carbon-14 dating. An important point for the ongoing discussion on Aegean chronology is made by Pearce et al., who demonstrate that certain traces in Greenland ice-core layers, previously taken to be stemming from the Minoan eruption of Thera, in fact originate from eruptions of the Aniakchak volcano in Alaska. The volume next includes articles that deal with historical chronology and archaeological evidence, arranged in the sections "Egypt", "The Levant and Syria" and "The Aegean, Cyprus and adjacent regions". In addition to reports and analyses dealing with many aspects of the chronology and archaeology of these regions, this part also contains M. Bietak’s study on all wall-paintings from Egypt, Israel, Syria and the Levant considered to be Minoan. The last section of the volume contains the proceedings of the special workshop "Myceneans and Philistines in the Levant, held within the framework of the SCIEM conference. The present volume sheds new light on the many themes covered by SCIEM 2000, themes of great spatial as well as temporal diversity. Both recent research results and the desiderata and direction of future investigation are presented.