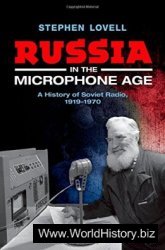 The story of radio begins alongside that of the Soviet state: Russia's first long-range transmission of the human voice occurred in 1919, during the civil war. Sound broadcasting was a medium of exceptional promise for this revolutionary regime. It could bring the Bolsheviks' message to the furthest corners of their enormous country. It had unprecedented impact: the voice of Moscow could now be wired into the very workplaces and living spaces of a population that was still only weakly literate.
The liveness and immediacy of broadcasting also created vivid new ways of communicating 'Sovietness' - whether through May Day parades and elections, the exploits of aviators and explorers, or show trials and public criticism. Yet, in the USSR as elsewhere, broadcasting was a medium in flux: technology, the broadcasting profession, and the listening audience were never static. Soviet radio was quickly earmarked as the mouthpiece of Soviet power, yet its history is also full of unintended consequences. The supreme irony of Soviet 'radiofication' was that its greatest triumph - the expansion of the wireless-listening public in the Cold War era - made possible its greatest failure, by turning a part of the Soviet audience into devotees of Western broadcasting.
Based on substantial original research in Moscow, St Petersburg, and Nizhnii Novgorod, Russia in the Microphone Age is the first full history of Soviet radio in English. In addition to the institutional and technological dimensions of the subject, it explores the development of programme content and broadcasting genres. It also goes in search of the mysterious figure of the Soviet listener. The result is a pioneering treatment of broadcasting as an integral part of Soviet culture from its early days in the 1920s until the dawn of the television age.