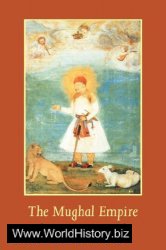 The Mughal empire was one of the largest centralized states in the premodern world and this volume traces the history of this magnificent empire from its creation in 1526 to its breakup in 1720. Richards stresses the dynamic quality of Mughal territorialexpansion, their institutional innovations in land revenue, coinage and military organization, ideological change and the relationship between the emperors and Islam. He also analyzes institutions particular to the Mughal empire, such as the jagir system, and explores Mughal India's links with the early modern world.