Armoured Warfare on the Eastern Front (Images of War) 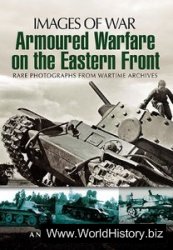 On the Eastern Front during the Second World War massive Soviet and German tank armies clashed in a series of battles that were unmatched in their scale and ferocity. Several of them have attained almost legendary status. But epic encounters such as these were only part of a broader story, as Anthony Tucker-Jones demonstrates in this selection of graphic photographs.
While the images give a fascinating inside view of combat, they also reveal the daily routines of tank warfare 65 years ago. Training, maintenance, transportation and supply are shown, as are the daily lives of the tank crews and the often appalling conditions in which they worked and fought. The photographs also record in vivid detail the destructive reality of armored warfare, from the initial triumphant advance of the German panzers deep into the Soviet Union to the massive Red Army counter-offensives which drove the German armies back to Berlin.