Tanks on the Beaches: A Marine Tanker in the Pacific War 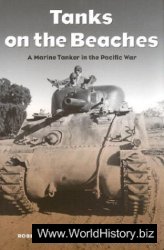 Robert Neiman, perhaps the most experienced combat commander of the U.S. Marine Corps’ tank arm, was one of the rare USMC officers to serve in both Iwo Jima and Okinawa battles. In Tanks on the Beaches, Neiman and his coauthor, Kenneth Estes, relay vivid accounts of fighting in the Pacific War, as well as Marine Corps service during the entire World War II period, devoid of idolatry and mythmaking. The result is a war story told from the unique perspective of men fighting from armored machines in desperate battles against a determined enemy.