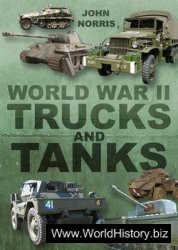 Many thousands of different types of vehicles were used by the armies during World War II for various roles, including the fighting vehicles such as armored cars and tanks. Today these are very popular with enthusiasts who restore the historic vehicles to their pristine state and attend specialist gatherings. This book introduces some of the better-known examples of these preserved vehicles as well as some of those which are not so well known. This range includes trucks to keep the armies supplied, ambulances, motorcycles, armored cars, and of course the impressive range of tanks from the smallest to some of the largest.