The March of Conquest; the German Victories in Western Europe, 1940 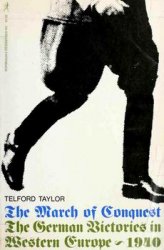 Denmark won in four hours, Norway conquered in four weeks, Holland overwhelmed in five days, Belgium crushed in eighteen days, Britain flung off ! the Continent and stripped of much of its army and most of its equipment in three weeks, and France defeated and occupied in less than two months — such was the achievement of the Wehrmacht in the spring of 1940, and ; although in the end it came to nothing, it was a triumph almost without equal in modern military history. In this long, lucid, and often eloquent study, Mr. Taylor, an American Army intelligence officer who served as chief counsel for the prosecution at the Nuremberg trials, tells us how it happened — the weeks of bitter struggle between Hitler and Goring and the generals, out of which the master plan emerged; the usually brilliant tactics that followed the launching of the attack; the almost paralyzing astonishment of the Nazi High Command at the success of the venture; the recovery; and the victory.